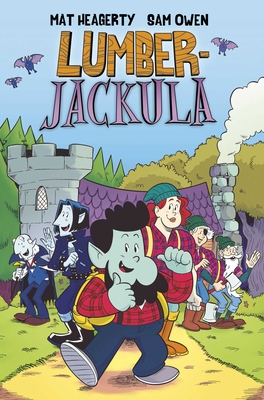 “Oh man this was such a cute graphic novel about a boy torn between two schools — either lumberjack or Vampire — while he doesn’t want to disappoint his parents when his real passion is revealed as a dancer.”
— Stephanie Rivera, Chapter Two...a Bookstore, Lompoc, CA

For fans of The Okay Witch and Fake Blood, this hilarious middle grade graphic novel follows a half-vampire, half-lumberjack boy who feels torn between his parents and just wants to be a dancer.

When he finds out about Tip Tap Twinkle Toes Dance Academy from new friend Plenty, Jack feels he’s finally found the place where he can be his true self. But he’s too afraid of disappointing his family to tell them. What’s a half-lumberjack, half-vampire boy to do?

To summon the confidence to pursue his dreams, Jack will have to embrace every part of himself—his lumberjack toughness, his vampire eeriness, and most especially his awesome dance moves.
Mat Heagerty is a comic book writer, rad dad, and all-around chipper dude. He’s the writer of Martian Ghost Centaur, Unplugged and Unpopular, and the graphic novel Lumberjackula, among others.

Sam Owen is a freelance comic artist and character designer with a focus on making fantasy and science fiction art geared towards young adults and kids. He’s also the illustrator of Lumberjackula, a middle grade graphic novel.