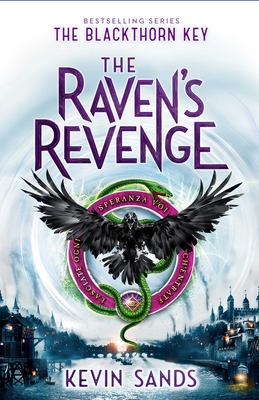 This is book number 6 in the The Blackthorn Key series.

Christopher finally uncovers the Raven’s identity in this sixth novel of the award-winning Blackthorn Key series.

The stakes are higher than ever when the Raven sets Christopher up for a horrible crime, leading him to be locked away in London’s most notorious prison. This terrible act is the first in a series of games the Raven plans to play with Christopher…games that are as dangerous as they are challenging.

Once free from prison, Christopher, Tom, and Sally engage in a cat and mouse game with the Raven that takes them all over London. Can Christopher outwit the Raven one final time and finally unmask him? And what price might he have to pay to achieve that? This is the thrilling conclusion to the Blackthorn Key series that fans have been waiting for!
Since escaping from university with a pair of degrees in theoretical physics, Kevin Sands has worked as a researcher, a business consultant, and a teacher. He lives in Toronto, Canada. He is the author of the award-winning and bestselling Blackthorn Key series.