Any Rogue Will Do (Misfits of Mayfair #1) (Mass Market) 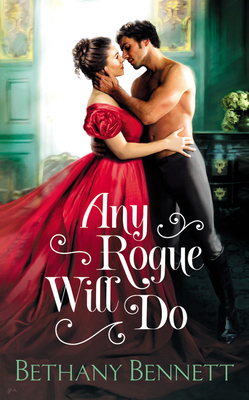 Any Rogue Will Do (Misfits of Mayfair #1) (Mass Market)

This is book number 1 in the Misfits of Mayfair series.

In a "splendid Regency-set debut" for fans of Netflix's Bridgerton series and bestselling authors Sarah MacLean, Lenora Bell, and Kerrigan Byrne, the rogue who once ruined Lady Charlotte's reputation is now the only one who can save her (Publishers Weekly, Starred Review).

For exactly one season, Lady Charlotte Wentworth played the biddable female the ton expected—and all it got her was society’s mockery and derision. Now she’s determined to be in charge of her own future. So when an unwanted suitor tries to manipulate her into an engagement, she has a plan. He can’t claim to be her fiancé if she’s engaged to someone else. Even if it means asking for help from the last man she would ever marry.

Ethan, Viscount Amesbury, made a lot of mistakes, but the one he regrets the most is ruining Lady Charlotte’s reputation. Going along with her charade is the least he can do to clean the slate and perhaps earn her forgiveness. Pretending to be in love with the woman he’s never forgotten is easy. What isn’t easy is convincing her to give him a second chance.
Bethany Bennett grew up in a small fishing village in Alaska where required learning included life skills like cold-water survival, along with several other subjects that are utterly useless as a romance writer. Eventually settling in the Northwest with her real-life hero and two children, she enjoys mountain views from the comfort of her sofa, wearing a tremendous amount of flannel, and drinking more coffee than her doctor deems wise.
"Everything I adore in a Regency—wit, steam, and heart!"—Grace Burrowes, New York Times bestselling author

"In [a] splendid Regency-set debut . . . Bennett turns a spotlight on the class distinctions and gender restrictions of 1819 England, with a formidable leading lady and a swoon-worthy hero with lower-class roots. Filled with gripping drama, strong characters, and steamy seduction, this tantalizing story is sure to win the hearts of Regency fans."—Publishers Weekly, starred review

"This is a fast-paced and spicy debut, with likable characters and a feel-good finale that boasts a just-right blend of tenderness and groveling."—BookPage, starred review

"This debut novel has everything regency fans love—wit, drama, loveable characters, steam, and romance all in an entertaining story."—All About Romance