Borderland: A Journey Through the History of Ukraine (Paperback) 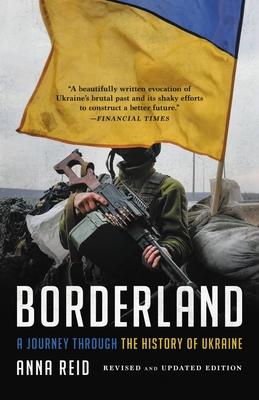 Borderland: A Journey Through the History of Ukraine (Paperback)

“A beautifully written evocation of Ukraine's brutal past and its shaky efforts to construct a better future.”—Financial Times

Ukraine is gripped in a bloody crisis that has killed tens of thousands, displaced millions, and is transforming the world’s energy policies and security architecture. As celebrated journalist Anna Reid shows in Borderland, this conflict is the latest of many. Ukraine has been a borderland, and a battlefield, for more than seven centuries, from the Mongol invasion of 1240 to the Maidan protests of 2014—and, of course, the devastating Russian invasion of 2022.

In this penetrating book, Reid combines research and her own experiences to chart Ukraine’s tragic past and uncertain future. Talking to peasants and politicians, rabbis and racketeers, dissidents and paramilitaries, survivors of Stalin’s famine and of Nazi labor camps, she reveals the layers of myth and propaganda that wrap this divided land. From the Polish churches of Lviv to the coal mines of the Donbass to the Tatar shantytowns of Crimea, the book explores Ukraine’s struggle to build itself a national identity. Updated to include firsthand material from the 2022 Russia-Ukraine war, Borderland is essential reading for anyone looking to understand Ukraine and how its history is shaping its destiny.

Anna Reid was Kiev correspondent for the Economist and the Daily Telegraph from 1993 to 1995, and has since covered the country for Newsweek and the Spectator. She is the author of The Shaman’s Coat: A Native History of Siberia, and Leningrad: Tragedy of a City Under Siege, 1941–44, which has been translated into eighteen languages and shortlisted for the Duff Cooper Prize. From 1992 to 1996 she ran the foreign affairs program at the London-based think tank Policy Exchange. She is a trustee of the Ukrainian Institute London.
"A beautifully written evocation of Ukraine’s brutal past and its shaky efforts to construct a better future . . . Reid succeeds in vividly conjuring up dozens of little ­known heroes and villains of Ukrainian history . . . Reid sum­mons up the rogues and poets of Ukraine’s past with a deft touch, but her real theme is the tragedy which has been Ukraine’s lot for much of its history . . . Borderland is a tapestry woven of the stories of all its inhabitants, recording their triumphs and their conﬂicts with the fairness of a compassionate outsider."—Financial Times

"Reid has stepped forth with an ambitious, fluent, and remarkably comprehensive synthesis that should be required reading for anyone interested in the region."—Boston Globe

"Beautifully written and lovingly researched . . . This book brims with colourful historical personalities . . . The mixture of travelogue, history, political analysis and anecdote makes Anna Reid’s account a highly digestible popular introduction to the tragic plight of a country whose very name means “Borderland”. “The West . . . had difficulty taking Ukraine seriously at all,” she writes. Her first (and I hope not her last) book is a noble and praiseworthy attempt to correct this gross historical injustice."—Daily Telegraph

"Gripping history . . . [Reid] writes with authority having lived for three years in Kiev as a reporter . . . [she] is remarkably clear­headed about the many competing versions of Ukraine’s history and its mostly invented heroes. A wise and generous government in Kiev would give her a medal."—The Times

"Anna Reid . . . has sharp vision and an enquiring mind which launched her on a journey through the country’s history to help her make sense of what she saw. Often controversial but never stuffy, she takes her reader at the same time on a tour of Ukraine, relating past events to a modern context . . . [she] proves herself an astute observer of the Ukrainian scene."—Times Literary Supplement

"This book takes the reader on a fascinating and often violent odyssey, spanning more than 1,000 years of con­ﬂict and culture. Reid covers events from the coming of the Vikings, to Stalin’s purges and beyond to the independence celebrations of 1991. She translates her obvious mastery of her subject into an accessible work, which should enrich the experience of any traveller to this new country."—Independent on Sunday

"A compelling and improbably enjoyable read . . . Despite its problems [Reid] says, the country has the potential to be one of Europe’s greatest states."—Scotsman