The Birders: An Unexpected Encounter in the Northwest Woods (Hardcover) 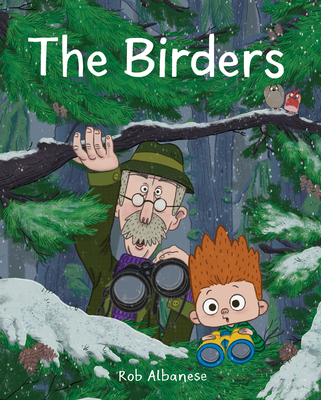 The Birders: An Unexpected Encounter in the Northwest Woods (Hardcover)


On Our Shelves Now
This humorous graphic novel picture book shares an unexpected friendship between a young boy and his elderly neighbor as they discover they have a lot to learn from each other.

As an elderly man wonders if his days of adventure are behind him, across the street a young boy is struggling with boredom. But then everything changes when they run into each other outside and, after a bit of commotion, get caught up in the pursuit to document an elusive snowy owl in the woods behind their houses.

As the day unfolds, they get to know each other better and realize that they each have something to teach the other, and their friendship starts to grow.

The Birders is a humorous and heartwarming intergenerational story.
ROB ALBANESE writes and illustrates books for children. He creates characters and scenes that connect with his inner child. Each book is an adventure and each character unique. Rob has honed his characters through years of drawing and his stories while raising his two children. They are his toughest critics and best audience. The Birders is his authorial debut.
"The best birding comedy here comes courtesy of the snowy owl, which reveals only its tail and talons to readers until appearing in full view in the book’s back matter, which discusses keeping a birding journal and offers facts about snowy owls."--Publishers Weekly

"Even city kids will appreciate this hot-off-the-presses whimsical story of an elderly man and his young neighbor who join forces to find an elusive snowy owl that lives in their neighborhood."--Tiny Beans