The Rot (The Raven Rings) (Hardcover) 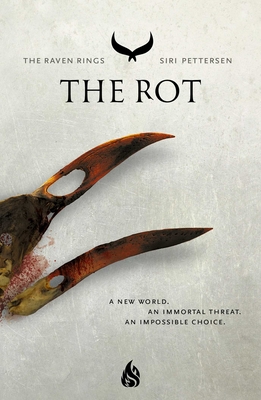 The Rot (The Raven Rings) (Hardcover)


On Our Shelves Now
Book Two in Siri Pettersen's epic fantasy trilogy - The Raven Rings - at last comes to the U.S. after taking European audiences by storm.

She has no identity. No family. No money. But the fate of the worlds rests in her hands.

Hirka is stranded in a rotting world, with nothing but a raven and a notebook to connect her to the life she left behind in Ym. She came in search of her family, believing that she could protect Rime and the rest of Ym from the ancient evil of the blind. Instead, what Hirka finds in this new world are people willing to do anything for the blessing—or the curse—of eternal life. And for Rime, the threat of the blind is only growing stronger …

Separated by worlds, unsure who to trust, and in danger from all sides, Hirka and Rime fight to end a thousand-year quest for power and revenge—and, maybe, to find a way back to each other.

In this follow-up to the international bestseller Odin's Child, Norse-inspired mythology combines with modern-day action to create a work that is wholly original, endlessly surprising, and utterly unforgettable.

Siri Pettersen made her sensational debut in 2013 with the Norwegian publication of Odin's Child, the first book in The Raven Rings trilogy, which has earned numerous awards and nomiations at home and abroad. Siri has a background as a designer and comics createor. Her roots are in Finnsnes and Trondheim, but she now lives in Oslo, where you're likely to find her in a coffee shop. According to fellow writers, her superpower is "mega-motivation"--the ability to inspire other creative souls.

Siân Mackie is a translator of Scandinavian literature into English. They were born in Scotland and have an MA in Scandinavian Studies and an MSc in Literary Translation as a Creative Practice from the Uni­versity of Edinburgh. They have translated a wide range of works, from young adult and children’s literature—including Ingunn Thon’s A Post­card to Ollis, which was nominated for the 2021 Carnegie Medal—to thrillers and nonfiction. They live in Southampton on the south coast of England.

Paul Russell Garrett translates from Norwegian and Danish, with drama holding a particular interest for him. He has translated a dozen plays and has a further ten published translations to his name, including Lars Mytting’s The Sixteen Trees of the Somme, long-listed for the International Dublin Literary Award, and a pair of novels by Christina Hesselholdt, Companions and Vivian. Originally from Vancouver, Paul is based in east London.
An absorbing book that sets the ground for a promising finale.
— Kirkus Reviews