Tangled Up in Nonsense (The Tangled Mysteries #2) (Hardcover) 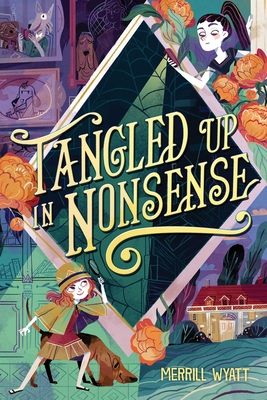 Tangled Up in Nonsense (The Tangled Mysteries #2) (Hardcover)

This is book number 2 in the The Tangled Mysteries series.

Sloane and Amelia clash with rival detectives when they travel to a secluded mansion in search of a missing fortune in this second book in the fun-filled Tangled Mysteries middle grade series perfect for fans of The Book Scavenger and Lemons.

When Sloane Osborn and Amelia Miller-Poe arrive at Tangle Glen mansion, they have one goal: find the two million dollars that went missing on its premises decades ago. Solving the mystery would be just the kind of splashy victory their new detective agency needs to gain traction.

Except that everything from the weirdly intense peony competition to the mansion’s cook who may or may not be hiding murder dolls in the attic seems to get in the way of their investigation. Not to mention Amelia’s obsession with speaking in 1920s slang, which sounds like a whole lot of nonsense to Sloane. And when it becomes clear that Amelia and Sloane aren’t the only ones searching for the missing millions, things start to get downright dangerous.

So, when Sloane finds herself stranded on the edge of a slippery roof as a terrified bloodhound careens toward her, she can only ask herself:
1. Why are adults so obsessed with peonies?
2. Just how far are the other detectives willing to go to find the millions first?
3. Is the rain gutter on a hundred-year-old mansion strong enough to hold the weight of a thirteen-year-old girl and an exuberant dog?
Merrill Wyatt lives in Toledo, Ohio, with her husband, daughter, three cats, and a slightly surly guinea pig. She spent far too much of her childhood wandering around cemeteries and old Victorian homes. A middle school technology teacher, she is doll-phobic, donut-obsessed, and owns too many pairs of shoes.