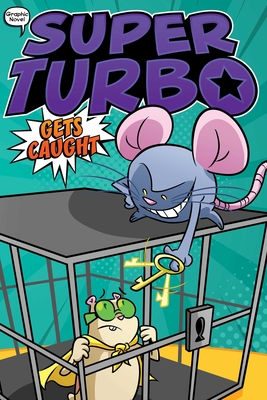 
On Our Shelves Now
In the eighth book of the Super Turbo graphic novel series, Turbo is trapped, and his only way out might be...with help from the enemy!

It’s a typical night for the Super Pet Superhero League as they make their rounds at Sunnyview Elementary. All seems quiet as Super Turbo walks the perimeter of the lunchroom, until he turns a corner and spies a tasty midnight snack! Just as he wraps his mighty paws around the treat—SLAM!—our favorite hamster hero finds himself trapped in a mousetrap. But the evil Whiskerface and his Rat Pack have been escaping these traps for years. How?! Could the key to Turbo’s freedom lie in the hands of his greatest enemy?
Edgar Powers is lucky enough to continue the harrowing adventures of Super Turbo and the Superpet Superhero League. He lives in New York and isn’t a fan of the evil Whiskerface.