Now in November: A Novel (Paperback) 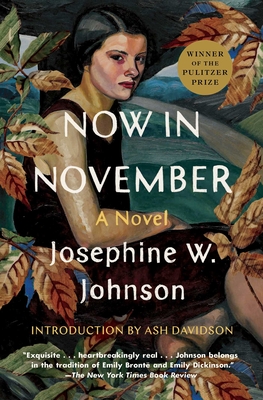 Now in November: A Novel (Paperback)


On Our Shelves Now
A lost gem of twentieth-century literature, Josephine Johnson’s 1934 Pulitzer Prize–winning “exquisite…heartbreakingly real” (The New York Times Book Review) novel follows a year in the life of a family struggling to survive the Dust Bowl.

Published when Josephine Johnson was only twenty-four years old, Now in November made Johnson the youngest ever winner of the Pulitzer Prize in 1935. It is a beautifully told account of one farming family’s challenges to scrape by and earn a living from mortgaged land over the course of a single year, narrated by one of three sisters—the introspective and thoughtful Margaret. As the household is ravaged by Depression-era hardship and the environmental blights of the Dust Bowl, the family’s unique vulnerabilities are pushed to a breaking point.

In a style typical of Johnson’s body of work, Now in November is strikingly ahead of its time, grappling with questions of mental health, worker’s rights, as well as gender, race, and class and is ready to be rediscovered by a new generation of readers.
Josephine W. Johnson (1910–1990) was a novelist and nature writer who in 1935 became the youngest person to win the Pulitzer Prize for Fiction for her first novel, Now in November. She began her studies at Washington University and went on to write eleven books over the course of her life. When it was originally published in 1969, The Inland Island, her lyrical examination of a year on her rambling thirty-seven-acre farm in Ohio, became a beloved and critically acclaimed bestseller.
“A gorgeous, painful rendering of a family living through the Great Depression and the Dust Bowl… a study in voice and craft.”—The Cut

“Required reading. Beautifully done, with just enough restraint and gripping power to sear the story unforgettably on the mind… Too fine a book to fall by the roadside.”—Kirkus