Boldly Go: Reflections on a Life of Awe and Wonder (Hardcover) 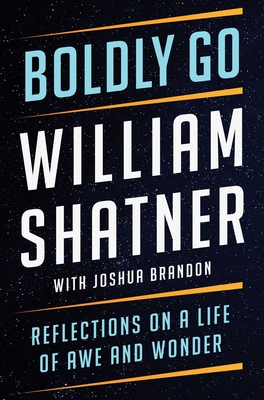 Boldly Go: Reflections on a Life of Awe and Wonder (Hardcover)

By William Shatner, Joshua Brandon (With)


Coming Soon - Available for Pre-Order Now
The beloved star of Star Trek, recent space traveler, and living legend William Shatner reflects on the interconnectivity of all things, our fragile bond with nature, and the joy that comes from exploration in this inspiring, revelatory, and exhilarating collection of essays.

Long before Gene Roddenberry put him on a starship to explore the galaxy, long before he actually did venture to space, William Shatner was gripped by his own quest for knowledge and meaning. Though his eventful life has been nothing short of extraordinary, Shatner is still never so thrilled as when he experiences something that inspires him to simply say, “Wow.”

Within these affecting, entertaining, and informative essays, he demonstrates that astonishing possibilities and true wonder are all around us. By revealing stories of his life—some delightful, others tragic—Shatner reflects on what he has learned along the way to his ninth decade and how important it is to apply the joy of exploration to our own lives. Insightful, irreverent, and with his signature wit and dramatic flair, Boldly Go is an unputdownable celebration of all that our miraculous universe holds for us.
William Shatner is the author of nine Star Trek ® novels, including the New York Times bestsellers The Ashes of Eden and The Return. He is also the author of several nonfiction books, including Get a Life! and I’m Working on That. In addition to his role as Captain James T. Kirk, he starred as Denny Crane in the hit television series from David E. Kelley, Boston Legal—a role for which he won two Emmy Awards and a Golden Globe. Find more information at WilliamShatner.com.

Joshua Brandon, Mr. Shatner’s coauthor, is a director, producer, and writer, whose credits include CBS’s Friend Me, SyFy’s Haven, Fox’s Houdini & Doyle, and the upcoming feature film A Thousand Little Cuts.
“Even those who aren't fans of Shatner's acting or his music will find much toappreciate in the insights he's gleaned over his long, productive life.” —Booklist


"Shatner’s curiosity shines through as he leavens the seriousness of his lifelong quest for meaning with his signature self-effacing humor…the result is a refreshingly self-aware portrait of a man determined to live every moment to the fullest." –Publishers Weekly