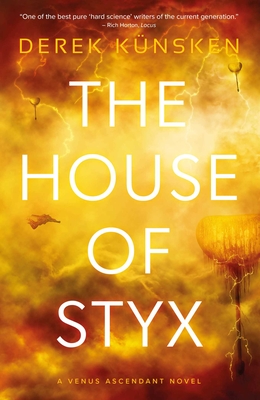 
Usually Ships in 1-5 Days
Discover the beginnings of the Quantum Evolution with The House of Styx, the start of a groundbreaking new series set 250 years before The Quantum Magician.

A groundbreaking new series set 250 years before The Quantum Magician.

Life can exist anywhere. And anywhere there is life, there is home.

In the swirling clouds of Venus, George-Étienne and his children are one of a few families of la colonie living on floating plant-like trawlers, salvaging what they can in the fierce acid rain and crackling storms. Outside is deadly for the unprepared or unwary, but the planet’s atmosphere is far from the only threat a family can face.

For the surface of Venus carries its own secrets, too. In the depths, there is a wind that shouldn’t exist. For George-Étienne and the House of Styx, harnessing it may be worth risking all.
Derek Künsken has built genetically engineered viruses, worked with street children and refugees in Latin America, served as a Canadian diplomat, and, most importantly, taught his son about super-heroes and science. His short fiction has appeared in Analog Science Fiction and Fact, Beneath Ceaseless Skies and multiple times in Asimov’s Science Fiction. His stories have been adapted into audio podcasts, reprinted in various Year’s Best anthologies, and translated into multiple languages. They have also been short-listed for various awards, and won the Asimov’s Readers’ Award in 2013.
“A boldly ambitious debut.” -- SFX Magazine
— SFX Magazine

“I have no problems raving about this book. A truly wild backdrop of space-opera with wormholes, big space-fleet conflict and empires.... What could go wrong?” -- Brad K. Horner
— Br?ad K. Horner

“The Quantum Magician is the type of book you go back to the beginning and read again once you know how everything pans out and have those ‘why didn’t I see that the first time?’ moments.” -- Strange Alliances
— Strange Alliances

“The Quantum Magician is a space adventure built on the scaffolding of a classic con job movie (think The Italian Job or Ocean’s Eleven). It hits all the right beats at the right time, and part of the fun in reading it is wondering: what will go wrong? Who will betray who? What will be the reversals? When done well, as in the case of The Quantum Magician, it’s a delight to read.” -- The Ottawa Review of Books
— The Ottawa Review of Books

“The Quantum Magician feels like what would happen if Locke Lamora landed in Bank’s Culture, and if Locke had a lot to say about depraved humans. And I do love me a con artist story! Also? The writing is brilliant, the pacing is damn near perfect, the dialog is fun and snarky, the characters are great, I couldn’t put this book down!” -- The Little Red Reviewer
— The Little Red Reviewer

“Con games and heists are always hard to write – one like this, which comes out pitch perfect, wrapped in a nuanced and striking sci-fi narrative is, to say the least, a rarity.” -- SF and F Reviews
— SF and F Reviews

The House of Styx is a stunning new sci-fi family drama that admirably shoulders the burden of two heavy genres and distills them into an exhilarating and heart-breaking journey of discovery." -- SciFiNow, 5 star review
— SciFiNow

"This electrifying planetary adventure features a hardscrabble family that earnestly addresses issues of addiction, gender, sexuality, and disability while surviving storms of all sorts in the hostile clouds of Venus. Highly recommended." -- The Library Journal, starred review
— The Library Journal

"Künsken has, to my mind, already established a place as one of the best pure ‘hard science’ writers of the current generation, and this book is further evidence of that.” -- Rich Horton, Locus Magazine
— Rich Horton

"Sometimes nail-biting and always well-paced, The House of Styx is high concept sci-fi that puts characters first—and succeeds by doing so." -- Aurealis
— Aurealis