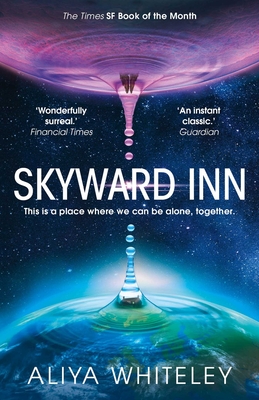 
Usually Ships in 1-5 Days
The highly-anticipated paperback release of the critical hit, a thoughtful, literary novel about conflict, identity and community.

“Skyward Inn feels like an instant classic of the genre.” -- The Guardian

Drink down the brew and dream of a better Earth.

Skyward Inn, within the high walls of the Western Protectorate, is a place of safety, where people come together to tell stories of the time before the war with Qita.

But safety from what? Qita surrendered without complaint when Earth invaded; Innkeepers Jem and Isley, veterans from either side, have regrets but few scars.

Their peace is disturbed when a visitor known to Isley comes to the Inn asking for help, bringing reminders of an unnerving past and triggering an uncertain future.

Did humanity really win the war?

This is Jamaica Inn by way of Jeff Vandermeer, Ursula Le Guin, Angela Carter and Michel Faber, a beautiful story of belonging, identity and regret.
Aliya Whiteley is one of the most exciting talents in the UK. The author of five books of speculative fiction, including the Arthur C. Clarke Award shortlisted The Loosening Skin. Her novels have been shortlisted for many awards, including the Clarke Award, the Shirley Jackson Award and the James Tiptree Jr. Award. She lives in Sussex with her husband and teenage daughter.
“Its triumph lies in the way Whiteley uses the metaphor to examine the tortured process of love and attachment.” -- The Guardian
— The Guardian

“A murky delirium of sinuous language and unnerving storytelling that will delight both experienced genre fanatics and literary fiction lovers alike.”
— Kirkus

"A story of the future that is an appeal to the present. The best kind of science fiction. A novel of its time, confronting current and terrible misjudgements with which humanity assures its own demise. All made startling by a typical Whiteley strangeness." -- Adam Nevill, author of The Reddening and Wyrd and Other Derelictions

"Whiteley [is] one of the most original and provocative voices in contemporary science fiction." -- Nina Allen, author of The Rift

“The absolute best kind of philosophical SF, & indisputable inheritor of Le Guin. Aliya Whiteley forces us to confront difficult ideas, but they are important, and will become even more so. Exactly what SF should do.” -- Marion Womack, author of The Golden Key

"Clever and touching: a book of cosmic scope but with real characters and a human heart." -- Chris Beckett, author of the award-winning Dark Eden series

"A powerful and surprising examination of colonialism and its unintended consequences. Highly recommended." -- Helen Marshall, author of The Migration

“Skyward Inn is an experience. Whiteley is a strong voice in speculative fiction and readers will be delighted and unsettled by her novels for years to come.” -- The Nerd Daily
— Kibby Robinson

"Whiteley takes the reader on a cryptic journey of trust, identity and knowing your place in the world." -- Starburst Magazine
— Fred McNamara

"There are some books that are simply beautiful. And Skyward Inn by Aliya Whiteley is one of those." -- Libri Draconis
— Libri Draconis

"A melancholy and compellingly weird tale of identity in crisis." -- SFX
— Will Salmon

“Skyward Inn feels like an instant classic of the genre.” -- The Guardian
— Lisa Tuttle

"Rarely has a writer who is not Philip K. Dick had so much fun building a world only to take it apart." -- LA Times
— Noah Berlatsky

"A vital contribution to modern speculative fiction and a novel to be read and reread and pondered at length.” -- The Fantasy Hive
— Jonathan Thornton

"When it comes to misdirection, Aliya Whiteley is the very devil." -- The Times
— Simon Ings

The Times SF Book of the Month
— The Times

"Whiteley explores questions of identification, attachment and belonging, tying everything together in a wonderfully surreal and weirdly uplifting denouement." -- The FT
— James Lovegrove

"A book to take solace in."
— Locus Magazine