The Memoirs of Sherlock Holmes (Hardcover) 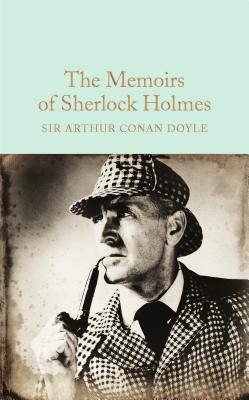 The Memoirs of Sherlock Holmes (Hardcover)

Sherlock Holmes is back on the case in this collection of sparkling short stories. Not only does Sir Arthur Conan Doyle's brilliant detective investigate a fascinating series of crimes and misdemeanours in The Memoirs, but we also learn about Holmes' early days as a sleuth hound and encounter the detective's brilliant brother, Mycroft, who is a member of the Diogenes Club, one of the strangest establishments in London. And, of course, in The Final Problem Holmes come face to face with his nemesis, Professor Moriarty, the Napoleon of Crime. Their struggle, seemingly to the death, was to leave many readers desolate at the loss of Holmes, but was also to lead to his immortality as a literary figure.

With an Afterword by David Stuart Davies, a Fellow of the Royal Literary Fund, and an authority on Sherlock Holmes. He has written the Afterwords for all the Macmillan Collector's Library Holmes volumes.

Stories included in this edition:
Silver Blaze
The Yellow Face
The Stockbroker's Clerk
The Gloria Scott
The Musgrave Ritual
The Reigate Squires
The Crooked Man
The Resident Patient
The Greek Interpreter
The Naval Treaty
The Final Problem

Arthur Conan Doyle (1859-1930) studied medicine at Edinburgh University, but ultimately gave up medicine to pursue a career in writing both fiction and non-fiction. His iconic sleuths, Holmes and Watson, have entertained generations of readers.

An internationally recognized expert on Sherlock Holmes and Conan Doyle, David Stuart Davies is the editor of the crime fiction magazine Sherlock and the author of several books on Sherlock Holmes. He also edits the Crime Writers' Association's monthly Red Herrings magazine. Forests of the Night was his first Johnny Hawke novel. He lives in West Yorkshire, England.