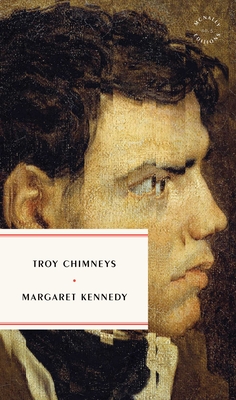 
On Our Shelves Now
“Tense, touching, human, dire, and funny” (Elizabeth Bowen): a Regency novel like none before or since.

Troy Chimneys purports to be the private memoirs of Miles Lufton, a minor politician of Regency-era Britain. In them he recounts, with tongue partially in cheek, the battle between the two sides of his personality: the man of sensibility versus the ruthless social climber. But as he charms his way into love and power, the duel threatens to destroy him.

In Margaret Kennedy’s later novels, Anita Brookner observed, “virtue does not triumph, patience is not rewarded, people do not receive . . . their just deserts.” A tragicomic confession, by a hero worthy of Jane Austen, Troy Chimneys is the apogee of Kennedy’s late style.
Margaret Kennedy (1896–1967) found popular acclaim before the age of thirty with her 1924 novel The Constant Nymph. It sold copies in the millions and spawned no fewer than three screen adaptations. One of the most successful and prolific British novelists of the twentieth century, she also produced literary criticism, plays, screenplays, and a biography of Jane Austen.
"It is hard not to see Troy Chimneys as something as a rebuttal to the civilized romance of Pride and Prejudice . . . The bite of sadness at the end of this surprising novel leaves a deeper gash than one expects from a book of such impeccable manners . . . Truly original."
— Sam Sacks

“Troy Chimneys is a disconcerting novel . . . If [its manner] marries uneasily with the tradition of the English novel as practised halfway through the twentieth century, then it must be allowed that Margaret Kennedy cannot be relied upon to give her readers what they think they have been led to expect. She is disconcerting in her preoccupa- tions, disconcerting in her methods, and technically more learned and experimental than many of her successors.”

“It was light-touch satire, and wry and incisive social observation, that formed the common threads that bind Kennedy’s novels together . . . [She] combined imagina- tion, observation and a powerful flair for human psychol- ogy to create real, walking, talking individuals whose choices had profound, often disastrous, repercussions that often spread far beyond their social spheres.”

“An extremely accomplished re-creation of the period. Its texture has the richness that comes from a structure that is both elaborate and distinct . . . Another contrast in the work is the polished simplicity which indicates such a high degree of technical skill and the imaginative strangeness with which the picture is tinted. The felicities are numerous, now bold like landscape, now subtle as the variations of light.”
— Elizabeth Jenkins