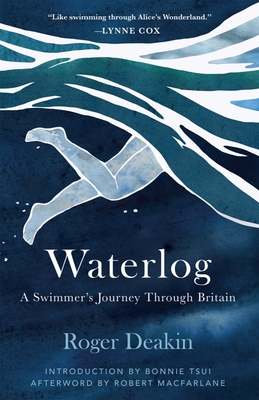 A Mother Jones' Best Book of the Year

"A beautiful ode to the act of swimming outdoors. . . . Deakin’s insistence on wild swimming for all is really an insistence on a better ecosystem for all." —The Atlantic

A masterpiece of nature writing, Roger Deakin’s Waterlog is a fascinating and inspiring journey into the aquatic world that surrounds us.

In an attempt to discover his island nation from a new perspective, Roger Deakin embarks from his home in Suffolk to swim Britain—the seas, rivers, lakes, ponds, pools, streams, lochs, moats, and quarries. Through the watery capillary network that braids itself throughout the country, Deakin immerses himself in the natural habitats of fish, amphibians, mammals, and birds. And as he navigates towns, private property, and sometimes dangerous waters and inclement weather, Deakin finds himself in precarious situations: he’s detained by bailiffs in Winchester, intercepted by the coast guard at the mouth of a river, and mistaken for a dead body on a beach. The result of this surprising journey is a deep dive into modern Britain, especially its wild places.

With enchanting descriptions of natural landscapes, and a deep well of humanity, boundless humor, and unbridled joy, Deakin beckons us to wilder waters and inspires us to connect to the larger world in a most unexpected way. Thrilling, vivid, and lyrical, Waterlog is a fully immersive adventure—a remarkable personal quest, a bold assertion of the swimmer’s right to roam, and an unforgettable celebration of the magic of water.

Roger Deakin was an English writer and celebrated environmentalist. Waterlog, the only book he published in his lifetime, became a UK bestseller, and founded the wild swimming movement. He also authored two other acclaimed works of nonfiction: Wildwood: A Journey Through Trees and Notes From Walnut Tree Farm. Deakin lived in Suffolk, England, and died there in 2006.

Bonnie Tsui is a journalist and the author of Why We Swim, a New York Times Book Review Editors' Choice, a TIME Magazine Must-Read Book of 2020, an NPR Best Book of 2020, and a Los Angeles Times and Boston Globe bestseller. It is currently being translated into six languages. Her first children's book, Sarah and the Big Wave, about the first woman to surf Mavericks, will be published in May 2021. She lives, swims, and surfs in the Bay Area.

Robert Macfarlane’s prize-winning and best-selling books include Mountains of the Mind, The Old Ways, Landmarks, and, with Jackie Morris, The Lost Words. He lives in Cambridge, England, where he is a Fellow of the University of Cambridge.

A beautiful ode to the act of swimming outdoors…. Through ecstatic and exacting descriptions of his many swims, Deakin introduces the reader both to the pleasures of outdoor swimming and to the richness of the natural landscape…. Deakin’s insistence on wild swimming for all is really an insistence on a better ecosystem for all.
— The Atlantic

Sublime.... His swim isn’t just about moving, but about, literally and ecstatically, being moved.
— The Cut

[Waterlog] might be the most romantic swimming memoir ever
written. Its spirit, and the way it illuminates the joy and complexity
of water, of swimming in the wild, places it next to Thoreau’s Walden.
As Thoreau 'went to the woods,' Deakin went into the water.
— Harper's Magazine

His prose is sensuous . . . and his sense of humor is as dry as his theme is wet.
— Rebecca Mead - The New Yorker

Roger Deakin is the perfect companion for an invigorating armchair swim. Engaging, thoughtful, and candid.
— The Telegraph

Part amphibious adventure memoir and part right to roam manifesto, beneath Waterlog’s delightful quirk lies a serious treatise on public access and the belief that swimming is intrinsically transformative.... Sublimely subversive reading of the highest order.

A classic ode to wild swimming.
— Outside Magazine

[A] beautiful meditation on swimming in nature. . . . He writes with
sensitivity and a great appreciation for the world around him.
— Jezebel

Waterlog is an adventure, a meditation, a celebration of wild swimming—a delight. In this book, Roger Deakin has captured the magic of the liquid world.

— Susan Casey, author of The Wave

His prose works a spell.
— Zoomer

The foundational text for the international 'wild swimming' movement. . . . A beautifully written, loving tribute to the wonders found swimming in the wild outdoors.
— Kirkus, Starred Review