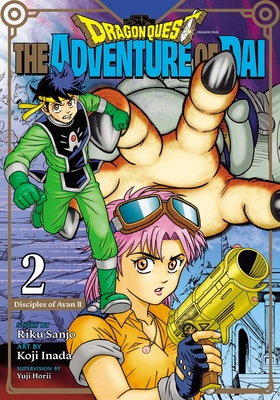 
On Our Shelves Now
Begin the adventure of a lifetime in this classic fantasy series set in the world of the legendary Dragon Quest video games!

Raised by monsters in a world scarred by battle, Dai has the heart of a hero! But it will take a grand world-spanning adventure and the help of some great friends for Dai to master the powers within him and become the hero he was always meant to be.

Dai and his new companion Popp run into trouble after setting out for Romos. The magical gun-wielding warrior priest Maam lends unexpected help, but that isn’t her only surprise—she also has a history with Avan! The trio must learn to work together or face defeat at the hands of Furfang Legion commander Crocodine…
Riku Sanjo was born in Oita in 1964. He began his manga career writing a radio-controlled car story for the magazine Comic BomBom. Dragon Quest: The Adventure of Dai launched in 1989 as Sanjo and Koji Inada’s first work together. Beet the Vandel Buster, their latest collaboration, debuted in Monthly Shonen Jump in 2002.

Koji Inada was born in Tokyo in 1964. He debuted as a manga creator with Rouge Magic in 1985. His first serialized manga, Dragon Quest: The Adventure of Dai, started in Weekly Shonen Jump in 1989. Inada and Sanjo’s Dragon Quest IV Gaiden -Jigoku no Meikyu- (Dragon Quest IV Side Story: Hell’s Labyrinth) followed in 2001, the year before their most recent series.

Yuji Horii was born in Hyogo in 1954. He entered and won Enix’s (now, Square Enix) game programming contest in 1982. As a game designer, he’s known as the Dragon Quest series creator. He’s created multiple hit titles in the series and is still active in the world of game design.