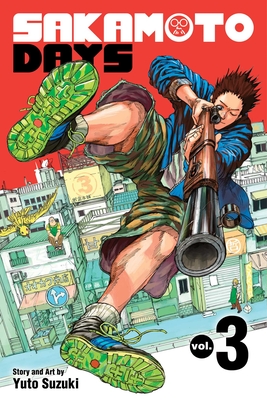 This is book number 3 in the Sakamoto Days series.

Taro Sakamoto was once a legendary hit man considered the greatest of all time. Bad guys feared him! Assassins revered him! But then one day he quit, got married, and had a baby. He’s now living the quiet life as the owner of a neighborhood store, but how long can Sakamoto enjoy his days of retirement before his past catches up to him?!

Team Sakamoto enters an airsoft tournament organized by the shopping arcade in the hopes of winning the million-yen prize. However, things don’t go as planned and they find themselves teaming up with a not-so-sharp sniper called Heisuke. Meanwhile, some shady characters connected to the secret organization that raised Shin are on their way to Sakamoto’s...
Yuto Suzuki is a Japanese manga artist who previously published the one-shots “Garaku” and “Locker Room” for Shonen Jump+. Sakamoto Days began serialization in Weekly Shonen Jump in 2020.