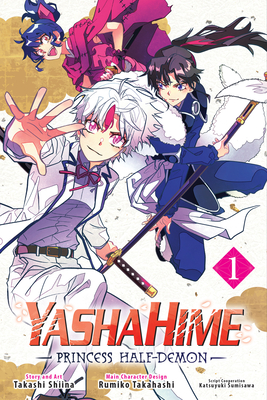 By Takashi Shiina, Rumiko Takahashi (Designed by), Katsuyuki Sumisawa (Other adaptation by)

This is book number 1 in the Yashahime: Princess Half-Demon series.

The beloved fantasy adventure Inuyasha continues with the next generation of demon hunters!

Can the three teenage daughters of demon dog half-brothers Inuyasha and Sesshomaru save their parents, themselves, and both realms from the menace of the seven mystical Rainbow Pearls?

Living in the present day isn’t easy for Sesshomaru’s daughter Towa. She can’t remember where she came from, must conceal her mysterious powers, and is either worshipped or feared by girls she just wants to be friends with. But she has no way of returning to her own time until one day…a demon attacks and she is transported to feudal-era Japan.

There Towa, her twin sister Setsuma, and her cousin Moroha—Inuyasha’s daughter—have a mission bestowed upon them by the mystical Tree of Ages. With only vague memories of their past to guide them, the three young women set out to find their parents, heal a rift in time, and fulfill their royal destiny...
Takashi Shiina debuted in 1989 with Shiina Department Store. His first ongoing series, Ghost Sweeper Mikami Gokuraku Daisakusen!! (Ghost Sweeper Mikami: The Great Paradise Battle!!), was a huge hit. His manga Psychic Squad ran until July 2021 in the magazine Weekly Shonen Sunday. His series Yashahime: Princess Half-Demon is serialized in Shonen Sunday Super.

The spotlight on Rumiko Takahashi’s career began in 1978 when she won an honorable mention in Shogakukan’s prestigious New Comic Artist Contest for Those Selfish Aliens. Later that same year, her boy-meets-alien comedy series, Urusei Yatsura, was serialized in Weekly Shonen Sunday. Takahashi followed up the success of her debut series with one blockbuster hit after another—Maison Ikkoku ran from 1980 to 1987, Ranma 1/2 from 1987 to 1996, and Inuyasha from 1996 to 2008. Her recent notable works include Rin-ne and Mao.

Takahashi was inducted into the Will Eisner Comic Awards Hall of Fame in 2018. She won the prestigious Shogakukan Manga Award twice in her career, once for Urusei Yatsura in 1981 and the second time for Inuyasha in 2002. A majority of the Takahashi canon has been adapted into other media, such as anime, live-action TV series, and film.

Yashahime: Princess Half-Demon is set in the world of Takahashi’s Inuyasha and continues the adventures of the original characters as well as their descendants.