Three-Martini Afternoons at the Ritz: The Rebellion of Sylvia Plath & Anne Sexton (Hardcover) 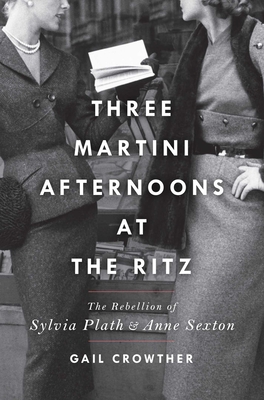 Three-Martini Afternoons at the Ritz: The Rebellion of Sylvia Plath & Anne Sexton (Hardcover)

A vividly rendered and empathetic exploration of how two of the greatest poets of the 20th century—Sylvia Plath and Anne Sexton—became bitter rivals and, eventually, friends.

Introduced at a workshop in Boston University led by the acclaimed and famous poet Robert Lowell, Sylvia Plath and Anne Sexton formed a friendship that would soon evolve into a fierce rivalry, colored by jealousy and respect in equal terms.

In the years that followed, these two women would not only become iconic figures in literature, but also lead curiously parallel lives haunted by mental illness, suicide attempts, self-doubt, and difficult personal relationships. With weekly martini meetings at the Ritz to discuss everything from sex to suicide, theirs was a relationship as complex and subversive as their poetry.

Based on in-depth research and unprecedented archival access, Three-Martini Afternoons at the Ritz is a remarkable and unforgettable look at two legendary poets and how their work has turned them into lasting and beloved cultural figures.
Gail Crowther is a freelance writer, researcher, and academic. She is the author of The Haunted Reader and Sylvia Plath and the coauthor of Sylvia Plath in Devon: A Year’s Turning and These Ghostly Archives: The Unearthing of Sylvia Plath. Gail divides her time between the North of England with her dog, George, and London. As a feminist vegan she engages with politics concerning gender, power, and animal rights.
"A beautifully written book that investigates the rebel poets Plath and Sexton. Gail Crowther tells the story with tenderness, warmth and wit. I was laughing on one page, wanting to weep on another. I can’t imagine a better book will be written on the subject. Absolutely fascinating."
—Andrew Wilson, author of Beautiful Shadow: A Life of Patricia Highsmith and Mad Girl’s Love Song: Sylvia Plath and Life Before Ted

"Compelling and extremely informative dual biography... a thrilling read... Offering a powerful and disturbing look into the forces that drive us to creativity and to our own destruction... this book leaves readers hungering for more of what these two literary comets burned with: the power of a little poetry. Deliriously fast-paced and erudite, this is highly recommended.”
—Library Journal (starred review)

"Gail Crowther's eloquent biography of Sylvia Plath and Anne Sexton strikes to the very heart of both women. While feminist in its bent, it is not limited to that approach and rings true to every aspect of the lives of these fascinating poets."
—Linda Gray Sexton, author of Searching For Mercy Street: My Journey Back to My Mother, Anne Sexton and Half In Love: Surviving the Legacy of Suicide

“[A] solid study that illuminates two ‘hugely ambitious women in a cultural moment that did not know how to deal with ambitious women’… Excellent research… this insightful account is a slick addition to the body of work on these two influential poets.”
—Publishers Weekly

“In Gail Crowther's Three Martini Afternoons at the Ritz, the friendship and rivalry that the pair shared—not to mention the titular cocktails at a Boston hotel—is explored in fascinating detail."
—Town & Country, “The 42 Must-Read Books of Spring 2021”