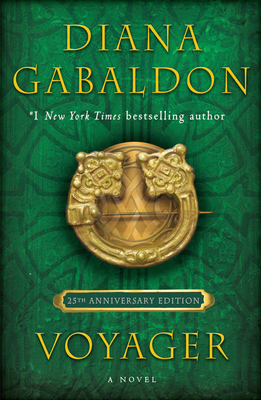 This is book number 3 in the Outlander Anniversary Edition series.

This special twenty-fifth-anniversary edition features a new introduction by Diana Gabaldon, an interview with the author, and a reader’s group guide.

“Triumphant . . . Her use of historical detail and a truly adult love story confirm Gabaldon as a superior writer.”—Publishers Weekly

In this rich, vibrant tale, Diana Gabaldon continues the story of Claire Randall and Jamie Fraser that began with the now-classic novel Outlander and continued in Dragonfly in Amber. Sweeping us from the battlefields of eighteenth-century Scotland to the West Indies, Diana Gabaldon weaves magic once again in an exhilarating and utterly unforgettable novel.

He was dead. However, his nose throbbed painfully, which he thought odd in the circumstances.

Jamie Fraser is, alas, not dead—but he is in hell. Waking among the fallen on Culloden Field, he is concerned neither for his men nor his wounds but for his wife and their unborn child. Lord, he prayed passionately, that she may be safe. She and the child. It’s a prayer he’ll utter many times over the next twenty years, never knowing but always hoping that Claire made it through the standing stones, back to the safety of her own time.

Safe she is, but believing Jamie gone forever, she’s obliged to live without a heart, her only comfort their daughter, Brianna. But now, their daughter grown, she discovers that Jamie survived, and a fateful decision lies before her: Stay with her beloved daughter, or go back to search Scotland’s dangerous past for the man who was her heart and soul, sustained only by the hope that they will still know each other if she finds him.
Diana Gabaldon is the #1 New York Times bestselling author of the wildly popular Outlander novels—Outlander, Dragonfly in Amber, Voy­ager, Drums of Autumn, The Fiery Cross, A Breath of Snow and Ashes (for which she won a Quill Award and the Corine International Book Prize), An Echo in the Bone, Written in My Own Heart’s Blood, and Go Tell the Bees That I Am Gone—as well as the related Lord John Grey books, Lord John and the Private Matter, Lord John and the Brotherhood of the Blade, Lord John and the Hand of Devils, and The Scottish Prisoner; a collection of novellas, Seven Stones to Stand or Fall; three works of nonfiction, “I Give You My Body . . .” and The Outlandish Com­panion, Volumes 1 and 2; the Outlander graphic novel The Exile; and The Official Outlander Coloring Book. She lives in Scottsdale, Arizona, with her husband.
"Triumphant ...her use of historical detail and a truly adult love story confirm Gabaldon as a superior writer."—Publishers Weekly