Everyone Dies Famous in a Small Town (Hardcover) 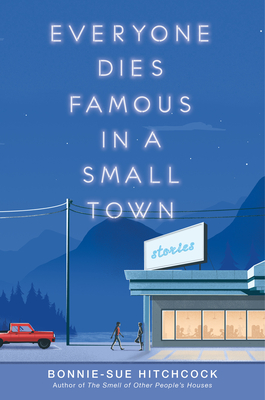 Everyone Dies Famous in a Small Town (Hardcover)


On Our Shelves Now
A lyrical and heartfelt collection by an award-winning writer that connects the lives of young people from small towns in Alaska and the American west. Each story is unique, yet universal.

In this book, the impact of wildfire, a wayward priest, or a mysterious disappearance ricochet across communities, threading through stories. Here, ordinary actions such as ice skating or going to church reveal hidden truths. One choice threatens a lifelong friendship. Siblings save each other. Rescue and second chances are possible, and so is revenge.

On the surface, it seems that nothing ever happens in these towns. But Bonnie-Sue Hitchcock shows that underneath that surface, teenagers' lives blaze with fury, with secrets, and with love so strong it burns a path to the future.
Bonnie-Sue Hitchcock was born and raised in Alaska. She worked for many years commercial fishing with her family and as a public radio reporter all over the state. Her debut novel, The Smell of Other People's Houses, was a William C. Morris Award Finalist and was shortlisted for the Carnegie Medal. She currently lives and writes in a yurt outside Fairbanks. Visit her online at hitchcockbs.com.
Honors and Praise for The Smell of Other People’s Houses
Shortlisted for the Carnegie Medal
William C Morris YA Debut Award, Finalist
Multiple best of the year lists

“A captivating debut by an exciting new author.” —Guardian

“This will inspire readers to count degrees of separation and ponder the temporal and spatial distances tragedy can reach.” —The Bulletin